Read up on PhysioWest and physiotherapy 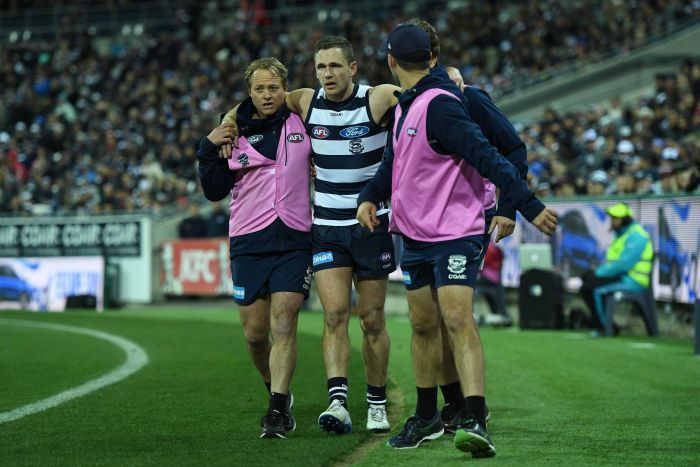 As the Swans increased their top 4 hopes after beating the Cats last Friday night, it was the sub-plot down at Geelong that made all the headlines in Saturday morning’s newspaper. Inspirational captain, Joel Selwood, hobbled off in the third quarter, picking up a nasty ankle injury.

It has since been confirmed that Selwood sustained a “syndesmosis” injury, ruling him out for the remainder of the home and away season, and a doubt for finals. A dagger to the heart of many Geelong fans I’m sure. So what is the “syndesmosis”?

An ankle syndesmosis injury is often called a “high ankle sprain”. It refers to the ligamentous structure or fibrous sheath which holds the two bones of your leg together (the tibia and fibula). The syndesmosis is commonly injured under an extreme dorsiflexion and external rotation force (wedged rotation), as Selwood found with his foot wedged under Franklin on Friday night.  This forceful compression causes the two bones of the leg to wedge apart, compromising the syndesmosis.

Like with any ligament injury, their severity is graded. Unfortunately for Joel, surgical intervention was decided, indicating a high grade injury or rupture to the tissue. This surgery usually involves pinning the two bones together, allowing the ligament to scar over in a shortened and stable position. For the average punter, 3-6 months rehabilitation is recommended, but at the elite level the boundaries are always pushed.

So will we see Selwood again this year? The Cats doctors and physios will be optimistic of Selwood featuring in their finals campaign, but it will certainly be pushing it. This is not your classic ankle sprain so caution must be taken.

This time last year, the Bulldogs Tom Liberatore missed 4 weeks with the same injury, before playing four weeks of finals and lifting the Premiership. Stephen Coniglio of GWS however hasn’t been as lucky, missing 6 weeks at the start of this season followed by 10 weeks mid year after re-injury in his second game back. Cats fans will be crossing their fingers for a Liberatore story here.

If you have injured your ankle, be sure to consult with your physio.  As in Selwood’s case, it may be more complex than anticipated, and a thorough assessment and rehab will minimise the risk of ongoing troubles in the future.

Our team at PhysioWest are skilled in the assessment and rehabilitation of ankle injuries. If you or someone you know is suffering from an ankle injury be sure to book online today!

PhysioWest offers comprehensive physiotherapy, exercise and massage services to assist our patients. Our team specialises in providing personalised treatment and physio-designed exercise classes to restore you to full health.